How agate is formed

China Onyx Stone suppliers generally believe that the primary Onyx Stone is formed by the residual hydrothermal fluid of magma. This hydrothermal fluid fills in the voids of volcanic rocks such as basalt and rhyolite or forms agate balls due to the different shapes of voids. After the action of natural forces, the original agate fell off and then was impacted by torrents, transported by running water, and ground into pebbles. This is what we see in the gravel layer of agate stone.​​

The main components of agate stone

China Onyx Stone suppliers indicated that agate stone is a kind of mineral formed after the early cavities were filled by hydrothermal fluid in the late volcanic period. It is a quartz material with a hardness of 6.5-7. Its color comes from trace metals or colored minerals, and its shape is mostly related to the generation space. The colors are extremely rich, yellow, white, red, ochre, blue, purple, and gray each show their beauty, and they are full of brilliance and splendor. There is Pink Onyx Slab Stone, or black jasper on milky white agate, or blue agate on red jasper. Trust your eyes and marvel at the wonders of nature. 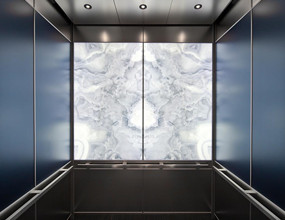 When the ancient Indians saw that the color and beautiful patterns of agate were very similar to the brain of a horse, they thought it was a stone turned from the brain of a horse, so they called it “horse brain” in Sanskrit. Before the Han Dynasty in my country, agate was called “Qiong”, “Chiqiong”, “Red Jade” or “Qiong Yao”. Since the introduction of Buddhist scriptures into China, the translators took into account that “the horse brain belongs to the jade class”, so they skillfully translated it into “agate”.

Agate is a colloidal aggregate of silica, often with a circular concentric filament-like or parallel strip-like structure. Its hardness even exceeds that of crystal. This hard, dense and delicate gemstone with beautiful color is the first-class raw material for carving arts and crafts.

China Onyx Stone suppliers said that agate is formed by the gradual precipitation of a colloidal solution containing sand acid in the crustal surface. Therefore, it is mostly layered, and the layers overlap each other into a corrugated shape, glossy like wax, slightly transparent or opaque. In addition, some agates present colorful effects, and a variety of colors are intertwined to form some unique and novel patterns.

China Onyx Stone suppliers, agate is cut and polished to make various decorations and ornaments. Agate is not only a precious decoration but also used to manufacture precision instruments such as wear-resistant utensils and compasses.

Some categories of China Onyx Stone 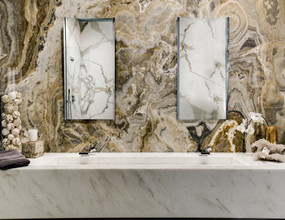 China Onyx Stone suppliers said that under normal circumstances, Fantasy Blue Onyx Slab feels very soft, and it looks very like it. The Turkish blue chalcedony is a relatively scarce agate. The color of this agate is relatively rich, and it gives people a beautiful enjoyment. Do you have this agate?

Chalcedony of Madagascar, this agate is mostly pebble-like, with good transparency, and it is crystal clear under the illumination of the light. In addition, this Madagascar chalcedony also has suet jade and yellow dragon jade grass flower style, which has a high collection value. Do you have this agate species in your collection?

The main chemical component of native agate is silicon dioxide. Due to the different types and contents of these pigment ions dissolved in the silicon dioxide hydrothermal solution, it presents thousands of shades and shades of color, making the Yuhua stone extremely beautiful and beautiful.

Perfect Stone is a masterpiece polished by China Onyx Stone suppliers. The local area is rich in beautiful colorful stones, which are colorful and sparkling under the sunlight, surpassing pearls and emeralds, and no less than Yuhua Stone in Nanjing.