Onyx natural has a long history. About 100 million years ago, underground magma was ejected in large quantities due to changes in the earth’s crust. When the lava cooled, steam and other gases formed bubbles. The air bubbles are sealed when the rock freezes, creating many holes. Much later, the holes were dipped into a solution containing silica and coagulated into silica gel. The fusible components of the iron-bearing rock enter the silica gel, and finally the silica crystallizes into agate. 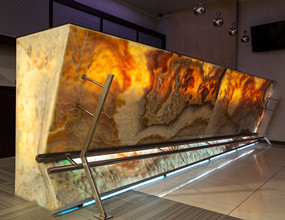 Perfect Stone as China Onyx Stone suppliers suggest that it is generally believed that native agate is formed by the residual hydrothermal fluid of magma. This hydrothermal fluid fills in the voids of volcanic rocks such as basalt and rhyolite. Depending on the shape of the voids, it is either agate balls or agate veins. After the action of natural forces, the original agate fell off, and then was impacted by torrents, transported by running water, and ground into pebbles. This is what we see in the gravel layer of agate stone.

Yuhua stone is famous in the world for its natural beauty of strange patterns and bright colors. Its circle pattern is formed by silica gel surrounding the voids and cavities of the volcanic rock, starting from the inner wall and depositing layer by layer from the outside to the inside. During its growth, periodic diffusion of colored ions and compounds often occurs.

Agate is classified by color

Perfect Stone as China Onyx Stone suppliers The banded structure in white agate is due to subtle differences in color or transparency. Except for those with larger pieces and more uniform color for engraving, most of the white agate needs to be dyed before they can be used.

China Onyx Stone suppliers tell you that the red agate produced in nature is rarely dark in color, mostly in lighter maroon and orange red. In the block, red and white bands of different shades and transparency are alternately distributed. The red color is caused by fine iron oxide particles. 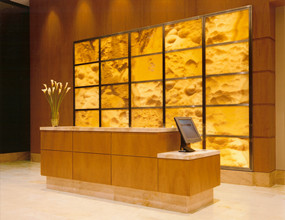 Naturally produced green agate rarely has a particularly bright color, mostly a light gray-green color, which is produced by the fine minerals such as chlorite.

Perfect Stone as China Onyx Stone suppliersBlack agate has been widely used as a jade material since ancient times. In ancient times, people often used “pearl agate” to describe wealth. Many foreign legends mention that black onyx can bring happiness and confidence to the wearer and bring sweet dreams. Scholars regard black agate as the “third eye” in gemstones, symbolizing friendly love and hope.

Perfect Stone as China Onyx Stone suppliersPurple and green agate are mostly blue-purple, green-purple colors, and the colors are not very blended. Although purple-green agate does not have dazzling colors, it gives people a sense of vitality. High-quality purple-green agate works even give people a lifelike feeling. Of course, this is not only because of the exquisite carvings of famous artists, but also with its unique color. have an inseparable relationship.